From the reactions to Kanye West’s latest fashion collection, to the campaign that is challenging society’s perception of beauty, here are the top fashion news stories this week that you definitely don’t want to miss.

Not everyone is happy that Kanye West has started a fashion line, as social media users reacted to his latest collection comparing it to outfits from the zombies in the Walking Dead, and claiming that he was going for the “homeless look.”

That doesn’t seem to be stopping the rapper though, as his New York Fashion Week show was filled with famous faces both on and off the runway – including Anna Wintour, Lorde, Drake and members from the Kardashian clan – as he showcased his second collection, entitled Yeezy 2.

When you hear the name Olivia Palermo you immediately think of style and the hottest accessories, right? Olivia Palermo is a genius when it comes to finding the latest accessories and truly unique pieces to complete every outfit, and that’s why her new Instagram post has created so much excitement.

Taking to Instagram, Palermo revealed that she would be collaborating with BaubleBar for an exciting new collection, which is set to launch later this month. Excited is an understatement.

Lane Bryant’s ‘Plus is Equal’ Campaign 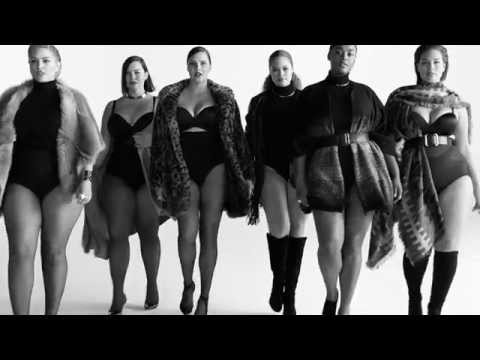 Candice Swanepoel may be a seasoned model, but even seasoned models trip up on the runway once in a while. The Victoria’s Secret model had a very unfortunately tumble while on the Givenchy runway during New York Fashion Week, and it resulted in scraped knees and a serious knock to her ego.

Swanepoel took to social media to share a picture of her bloody knees and thank the security guards who helped her get back on her feet.

Please Share This Story!A local artist, Ennock Mlangeni, has showed off his talent by creating a breath-taking charcoal portrait of Miss Universe 2019 Zozibini Tunzi. On Wednesday, the young ‘creator’ posted a snap of himself working on the massive portrait that could easily be identified as a picture of Zozi. He captioned the post: “I […]

Please Share This Story! In 19th-century rural China, peasant women of the Jiangyong County in the southern Hunan province developed a secret script named Nüshū. Its characters, mastered by women and indecipherable to men, appear in thin, downward-slanting wisps, like spider legs dancing across paper. Women used the writing system to communicate their most intimate […]

Uganda Faces Sex Tourism Backlash For Wanting To Using Curvy Woman For Tourism; Here Is Why Its A Good Idea

Please Share This Story!Why don’t we use these people [curvy women] as a strategy to promote our tourism industry?” In Uganda, a plan has been mooted to promote tourism in the country, but this plan is pretty much unfriendly. The tourism minister in Uganda, Godfrey Kiwanda, suggested the use of “curvy women” as a tourism […]